There are two main things to note before I hit the main components of this rant tryst exposition. Number one:

In my department, Algebraic Geometry is a big deal. We have two (count it: one, two) algebraists whose expertise in the subject is second-to-none, and we have another cluster who – despite being cross denominational in their research – are truly masters in the field.

In my department, Algebraic Geometry is a big deal.

It’s unsurprising, too, I guess: Since Grothendieck revamped the field in the 50s and 60s, its usefulness has been realized to be extremely wide-spread and, as such, people really really care about it.

In my department, Algebraic Geometry is a big deal. That’s the first thing to keep in mind.

END_OF_DOCUMENT_TOKEN_TO_BE_REPLACED

You may recall that I deemed yesterday Differential Geometry Sunday and posted a small expository thing on the Hodge Star/Dual operator. Apparently in my cloudy haze of mathematical mediocrity, I concluded my post without having touched on the derivations I actually intended to touch on.

Sometimes I feel like I need a vacation from my vacation.

In any case, I’m going to take a stab at saying some of the things I’d meant to say yesterday, but in order to ensure we’re all on the same page, I’m going to recall what exactly the Hodge Star/Dual operator is. Then, after the break, I’m going to show some of the cool derivations that come about because of it.

be a manifold of dimension

denotes a multi-index which – without loss of generality – can be assumed to be increasing. Then the hodge star operator is the operator which takes

is the multi-index consisting of all numbers

and the usual metric

and vice versa, it sends

respectively, and it sends

. But the question then remains: Why does anybody care?

END_OF_DOCUMENT_TOKEN_TO_BE_REPLACED

I’ve had a moderate amount of exposure to the study of differential forms in the context of pure differential geometry, as well as in the background of studies in hypercomplex analysis, abstract algebra, etc. Despite all that, I apparently never learned the actual definition of a differential form.

Recall that the covector space

of (tangent) vectors to

. Elements of are called covectors. An assignment of a covector at each point of a differentiable manifold is called a differential form of degree 1.

So I managed to go nine months without ever looking at this thing. That’s unfortunate. It is, however, an indication of how the past two semesters have been for me, time-wise.

Without moving backwards, I’ll leave this for an update:

All of those are important, of course, but the last one is the one that matters most.

When I started this thing, I’d meant it to be a place for sharing lots of general math stuff. Now that I (hopefully) have more time, I’m expecting more sharing to happen. Just to get things off on the right foot, here’s part of a little something I worked on last semester.

which are quaternion-valued functions of a quaternion variable. The function

is said to be (Feuter) Regular at

The Cauchy-Fueter Integral Formula
If

is regular at every point of the positively-oriented parallelepiped

is a point in the interior

Proof. The proof given largely follows the outline given by Sudbury. For an equivalent statement translated from the language of differential forms into the framework of vector fields and their integrals, see the proof on page 12 of Deavours.

be a 4-parallelepiped in

be an element of its interior

is real differentiable at every point

. Moreover, a simple computation verifies that

. From other results (see Sudbury), it follows that

Next, we use the dissection method from Goursat’s theorem. In particular, consider replacing

by a smaller parallelepiped

has a removable singularity at

, whereby it follows that choosing

be a 3-sphere with center

. This change of variables results in the following: 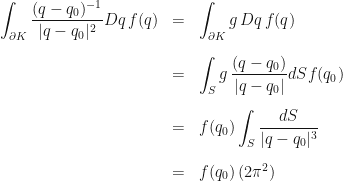 Dividing both sides by

yields the exact statement of the result.

The above is part of a (rather long) paper I finished last semester that’s in the infancy of a future as a potential pre-print/publication. I’m not going to link to it until I’ve done a bit more with it. Worth noting, too, is that this is the first time I’ve ever used WordPress’s incarnation of LaTeX, meaning there are many kinks to work out and much tinkering to do. I’m hoping that I can fit this blog into my plans for the rest of the semester, though, so maybe that will force me to do more with it.

Learning is never boring when the world is your classroom!

The Pleasure of Figuring Things Out

Some writings of a mathematical amateur

the road is life

"A good stock of examples, as large as possible, is indispensable for a thorough understanding of any concept, and when I want to learn something new, I make it my first job to build one." - Paul Halmos

Come for the math, stay for the puns

Ruminations of a Graduate Class

A rambling narrative of one man's journey through mathematics

Thought Catalog is a digital youth culture magazine dedicated to your stories and ideas.